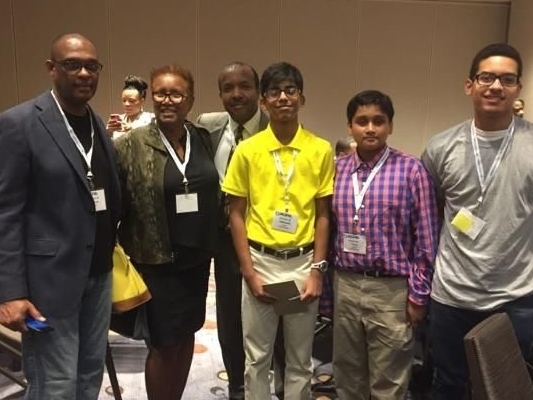 “We recruit students from Bloomington-Normal high schools to learn at our training academy. The goal of the program is to encourage African Americans to get into IT (Information Technology), but we will educate any student that wants to learn,” said Johnson, who also works as a system analyst at State Farm.

“We move at a pretty fast pace,” said Johnson. “But for kids who are technical, this is the kind of stuff they like to mess around with at home.”

The three Normal Community High School students chosen from the academy to compete in the national HSCC conference were Jordan Stipp, now a freshman at Stanford University; freshman Sidharth Panda; and sophomore Suraj Sunkara, who transferred this semester to Illinois Mathematics and Science Academy.

The teens joined 28 teams from across the country for the competition on Aug. 10.

“On the day of the competition, the teams were put in a ballroom and no adult trainers were allowed in the room. The organizers explained the task — building an online ticket purchasing system like Ticketmaster — and the teams went to work for seven to eight hours,” said Johnson.

The local team earned third place for its application of technology skills and also scored high in presentation.

“The kids don’t just learn about systems technology; they get exposed to working as a team, communicating and forming human skills to better function in the workplace,” said Johnson.

Johnson said all students should look into STEM (science, technology, engineering, and math) programs, such as the HSCC academy.

“We have high school kids who have decided this is the career they want to do, and because of that we work closely with State Farm,” said Johnson. “Even if they don’t go into an IT field as a programmer, they know what’s involved in creating these applications so they have insight if they were to work in a different position.”

The Twin Cities Chapter is focused on championing the next generation of IT leadership. As an organization staffed entirely of highly respected professionals in the Information Technology, we offer unique opportunities to connect members and students with cutting edge technologies and education.